Talking with the Antarctic

Thursday, 22nd February the students from the 4th level of ESO atended to the Faculty of Science in Rabanales accompanied by the teachers Trinidad Berral and Sara Delgado. They took part in a video conference with the Antarctica organized by the subgovernment of Defense in Córdoba and the University.
After a short explanation about the development of the sesión, we could get in touch with the Antarctic Base “Gabriel de Castilla” where we met three people who are nowadays carrying out a mission in that continent. They explained many aspects of the Antarctica as well as the different actions that are being developed and the diverse research projects that are being working on.
Later on, there was a round of questions in which our students could participate and in which several aspects related to the daily life in the base, the current research project and funny anecdotes were dealt with. We were even told that new species have been discovered in the continent and they are being used in the elaboration of medicines. 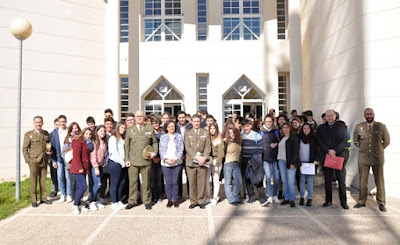 Finally, one of the components of the group went outside the base with a camera and we could see alive the surroundings. It was really amazing despite the strong wind!
The experience has been fantastic. Everybody was really happy with this conference and even the students were encouraged to keep on studying because our future and life depend on them.
In short, it was a very interesting visit in which we have learnt about such an unknown continent as the Antarctica by means of all the information we were given as well as the project we made. We have even been awarded!